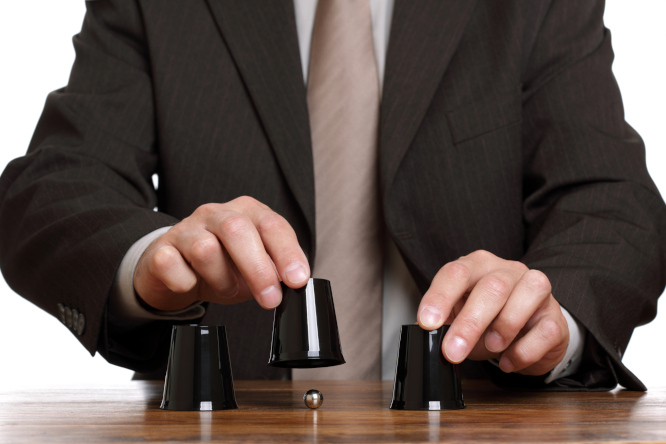 In a shell game, three or more identical shells (dixie cups, bowls, bottle caps, or anything similar) are placed face-down on a surface. A pea or pebble is placed beneath one of them so that it is hidden, and the shells are then shuffled by the operator in plain view. Players are invited to bet on which shell conceals the pea – typically, the operator offers to double a player’s stake if he guesses correctly. When the game is played honestly, the operator wins if he shuffles the shells so that the players cannot follow the one with the pea beneath it.

The shell game, however, is notorious for its use by con artists who will typically rig it by using sleight of hand to move or hide the pea during play and then replace it when required. Shell games are also known for the use of tricks to convince potential players of the game’s legitimacy – for example, by using a shill or by allowing a player to win a few times before beginning the scam.

One of my collaborative life planning clients recently reminded me of this old con. Just this morning, in the wee hours, I received new information from Jorge. It appears that he had wrestled with these issues, not just all night, but for some time.

Jorge first consulted me months ago, bringing his wife in to find out more about collaborative life planning and also about mediation. They had some issues to work on and one of my referral partners, a marriage counselor, had suggested that they research the possibility of negotiating resolution with me.

We met twice before they chose the collaborative process and, for all intents and purposes, this couple (she’s Slavic and he’s from South America) appeared very content together. They laughed, they joked, and they touched one another lovingly. They are raising two small children. They own and run a successful restaurant together (despite the pandemic lockdown). In fact, they are about to open a second restaurant.

Once his wife selected her own collaborative lawyer, we began work. Occasionally, during our four-way discussions, my divorce radar detected tension between them. I wondered what might also be going on. I inquired of my client, but he shrugged and said, “Everything is fine.”

We moved forward. Jorge’s wife’s lawyer drafted an initial agreement, primarily about the business operations and sharing of responsibilities for the current restaurant and the second restaurant they intended to open soon, as well as about the marital home, in the event that they broke up. (They had contributed premarital resources differently to both the first restaurant and the home and wanted credit pro rata for those contributions, rather than the standard 50/50 split.)

I’m far more obsessive than her lawyer so Open Palm crafted a new agreement; her lawyer was fine with that.

When one or both of us lawyers made suggestions, our clients requested additional provisions about alimony, the children, life insurance, and other things. 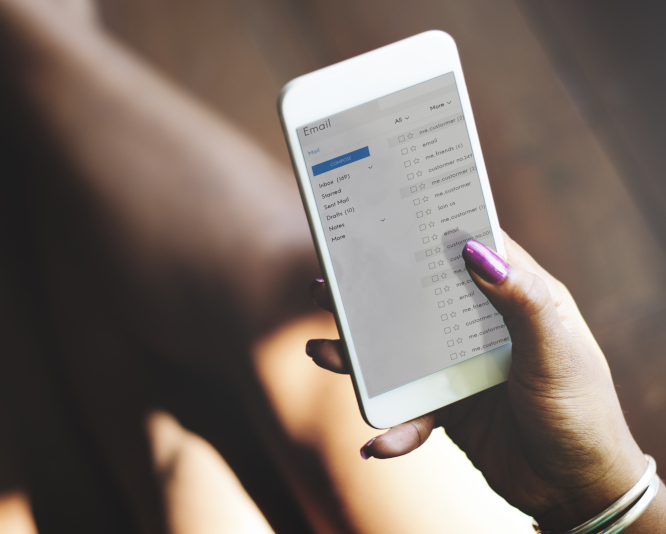 We finally scheduled a signing meeting for next week. Then I got this email:

Back in 2013, I filed for bankruptcy and, in 2014, my bankruptcy was approved. That was why we moved to Tampa. To start again.

Everything was/is in her name. Bank accounts, businesses, house, etc. and for me was never an issue actually a piece of mind.

But some months ago (after a fight), I realized that I was trusting too much my wife having everything in her name. I wanted to move out but then I realized I didn’t have anything in my name. How I will get money from banks? How can I rent anything to move if she is the one with the bank accounts in her name to show proof of income and in my credit history shows a bankruptcy and nobody probably will rent me.

And if she really wants to be mean she can even kick me out from my business because is in her name only.

I explained her why I was feeling trapped, and we agreed to do a post nup to give us a piece of mind and freedom for both of us.

Because she also wants to have her money without me asking her for anything. Because I have access to her online accounts including her personal and businesses accounts. And I’m the one who counts the money in the restaurant and deposits it.

After we sign the post nup, we will distribute the profit of the business every month and each of us can do whatever we want with our money.

And if we have another fight, we will be free to move to cool down without money fear.

So I guess we have to make it clear that, even though my wife is the only one who appears as the owner of the business’ bank accounts, she recognizes that the money belongs to the company and can’t take it for personal use until we both approve a distribution.

And the restaurant property is in the restaurant’s name and that my wife understands that she is not the owner personally but the company is (check with the property appraiser) and she can’t do anything until we both approve it.

And something else, I have a 22 yrs old son from my first marriage and if I die, he will not get anything because everything is in my wife’s name and I want to be sure if something happens to me he will get his share. Thank you

So we still have work to do. Thank goodness my client finally shared his deeper, scarier issues. Others, like these clients, are out there, looking for professionals who and processes that will enable them to feel safer in their marriages without further endangering their most important relationships. As difficult as collaborative life planning may be, agreements like the one we are negotiating will enable folks like these to avoid divorce.

Collaborative life planning is like the pea, hidden under a shell; it’s a vastly underrated and little-known art. Most lawyers would have assumed one of these clients was angling for a divorce, just getting all of his or her ducks in a row before pulling the trigger. And the potential clients out there know that.

Was my client hiding the pea? No; absolutely not. Clients just don’t trust the system. And I’m a lawyer, so I’m part of the system. Luckily, we offer something outside the system. But we must market it because if folks don’t know this solution, or opportunity, exists, their problems may never be solved.

Don’t hide the pea! For more on how to market your professional practice, reach out to me at Joryn@JorynJenkins.com or find me at Your Collaborative Marketing Coach. Because your marketing is my marketing!