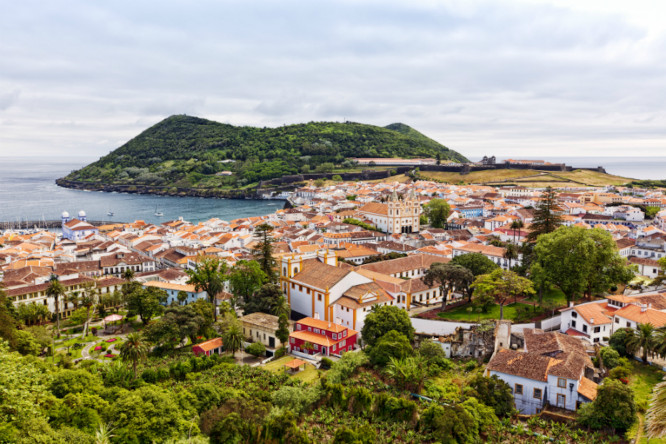 My girlfriend and I went on vacation together to the Azores. It was the first time since I’d been married, over 27 years ago, that I had taken a Girls Only trip. Despite that I missed Todd, who had had to beg off to deal with all of his end-of-year real estate deals, I enjoyed every minute of it. it was almost like being 23 again, after just graduating from law school. That summer, I bought a Eurail Pass and spent three months wandering around in Europe. And on my three visits to the Rodin Museum alone, I ran into three of my friends from law school, whom I had no idea were also seizing the moment to explore Europe before they knuckled down to paying back their student loans.

While Shelley and I were in the Azores, we enjoyed a nine-hour tour with a local guide, as well as with a couple who hailed from Zürich, and who spoke Swiss German as their first language. Little did I realize the opportunity to teach my girlfriend her first lesson in how to deliver a focused, effective pitch!

Both our tour guide and the Swiss butcher were conversant in English, so, at one point, while we stood in line among both tourists and locals, waiting for entry into the hot springs in Furnas, we chatted, trading explanations of our occupations. When it was her turn, Shelley explained that she was a “forensic accountant”; the butcher looked at her with a puzzled gaze of uncertainty.

When Shelley looked baffled as to his reaction, I suggested, “Joe doesn’t know the term ‘forensic accountant.’” This did not help her. “He doesn’t understand what that means, what it is that you do.“

Shelley tried again. “Are you familiar with the Enron conspiracy?” she probed.

He gave her a blank look, coupled with a shrug.

Shelley was ready to throw in the towel. She turned to me in exasperation. “I don’t know how to explain it.”

I smiled and turned to Joe. “Shelley helps people figure out where their spouses hid money when they decide to get divorced.” He grinned, a relieved look of comprehension suffusing his face.

Then it was my turn to demonstrate how to be a good partner to Shelley. I continued, “Shelley is one of the best people to retain if you know anyone getting divorced in Florida.”

Serendipity kicked in. “Actually,” Joe responded, “I do!”